Spring is officially in bloom, and we’re bringing you a few cases that haven’t quite been a walk in the park.

This month the cases focus on making fresh connections; be that the connection between a disability and unfavourable treatment or the overlap between different processes. For the full case update – sign up to our monthly employment law update here.

First up, the case of SW Yorkshire NHS Trust v Jackson, looked at the reason why an employer had failed to provide redeployment information to an employee on maternity leave.

An employer discriminates against a woman if they treat her unfavourably because she is taking maternity leave. In SW Yorkshire NHS Trust v Jackson, the employee was on maternity leave when redundancies were announced. She attended a consultation meeting and was put at risk of redundancy.

Redeployment information was sent to her work email account which she was not accessing while on maternity leave. She found out about the email, contacted the employer and got the relevant redeployment forms anyway. In reality, she was not disadvantaged by the short delay but she was concerned by it.

This case demonstrates the importance of agreeing communication methods with employees before their maternity leave starts. Confirm phone numbers and email addresses and ensure anyone contacting the employee understands what has been agreed.

In this months update we also cover discrimination arising from disability.

It is inherent in a claim of discrimination arising from disability that there is a connection between the individual’s disability and the unfavourable treatment that they experience. However, in the case of iForce v Wood, that link was missing when an employee with osteoarthritis was given a warning for failing to move desks based on fear of worsening her condition. As the employee was mistaken in her belief that moving desks would worsen her condition, the necessary causal link between her disability and the treatment was not present.

Moving from spring to science, some recent ACAS research has looked at a different type of connection; those in the brain. The research has concluded that one in seven of us are neuro-divergent, meaning that the brain functions differently to someone who is considered ‘neuro-typical’. The guidance outlines how and why employers should support neuro-diversity in the workplace, and highlights that neuro-diversity can bring strengths to an organisation.

In Beattie v Condorrat, the connection between a final written warning and a subsequent dismissal was examined. The employee argued that the failure to conduct a full investigation before issuing a warning made the warning unfair. The EAT did not agree – they reiterated the principle that the decision process in relation to earlier warnings should not be re-opened unless the decision was manifestly unreasonable.

Finally, the case of North West Anglia NHS Trust v Gregg considers overlapping disciplinary and criminal proceedings and whether the connection is a barrier to proceeding with the disciplinary process. The Court of Appeal’s answer – no. Despite the case involving a Doctor and allegations that he had caused the early deaths of several patients; the decision was that the trust had reasonable and proper cause to pursue the disciplinary case.

For the full case updates you can sign up to our monthly employment law update, or for an in-depth analysis of the cases and legislation that is likely to impact your business, you can sign up quarterly. 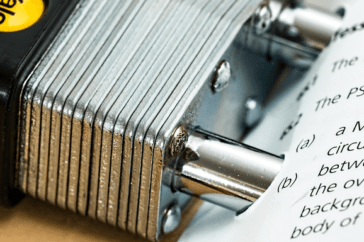 A Guideline on Employee Record Retention

We’re celebrating the 1 year GDPR anniversary by talking employee record retention. Article 5 of the GDPR states that personal data shall be kept no longer than is necessary for the purposes for which it is being processed. Understandably many HR teams want to know what this means in practice. However, with the exception of…